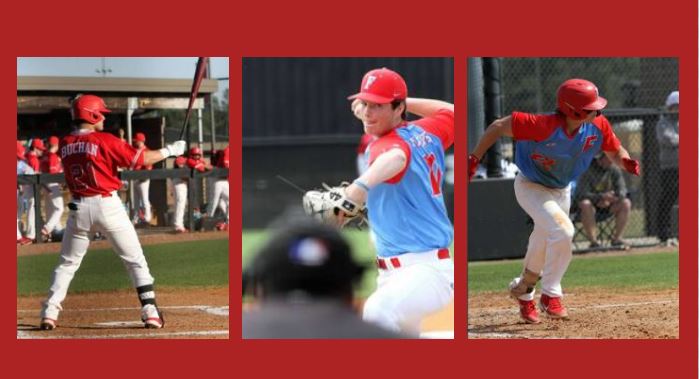 PITCHING AND THE LONG BALL PROPEL THE FALCONS TO VICTORY.

We would get on the bus Thursday night to travel to District foe across town and defeat the Devils from Dreher 7-1, thanks to a big four run seventh inning. Flora Falcons Varsity’s big inning was driven by a single by Jake Huggins, a home run by Zander Buchan, and a fielder’s choice by Tillman Geddings.

We would get on the board with 2 in the 3rd, a solo home run from Max in the 5th and a 2-run home run from Zander in the 7th. Tillman and Huggy would also pick up RBI’s in the 7th to finish the 4-run inning.
Tillman Geddings was the winning pitcher as the lefty went two and a third innings, allowing zero runs on one hit, striking out three and walking zero. Hill Teas and Huggins entered the game out of the bullpen and helped to close out the game in relief.

Shane Kemp took the loss for Dreher. The hurler lasted five and a third innings, allowing four hits and three runs while striking out five.

Our offense socked two home runs on the day. Buchan had a dinger in the seventh inning. Max Childress went yard in the fifth inning.

Flora Falcons Varsity totaled seven hits. Buchan and Childress would hit home runs on the night, Carew and Zander each had two hits to lead our offense