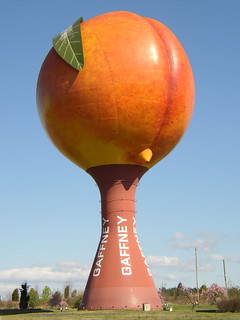 Not even the Giant Gaffney Peach could distract the adolescent AC Flora Junior Varsity Boys Golf Team as they brought home the hardware at The Gaffney Invitational held at Cherokee National Golf Club on Monday, April 7th, 2019, in Gaffney, South Carolina.

Thirteen teams weathered the elements with Our Falcons finishing on top with a strong showing at 310, topping second place Dorman by 29 strokes, and Lexington High by 31 strokes in the 18 hole affair.

Burch Harrison’s impressive 69 led the Falcons while earning medalist honors for the tournament, followed by Will Barnes’ 76. The scoring continued with Coleman Ferguson’s 80 and Blake Fisher’s 85. Jack Hane’s 90, Cooper Darby’s 95, and Fletcher Sterne’s 97 rounded out a solid day for the Falcon Future.

“It’s great to get our fourth win of the year to go along with our two second place finishes,” said Legendary Head Coach Robert Dargan, who led the team probably just so he could take a glance at The Giant Peach. “Our guys showed why they are an outstanding team and I am proud of their efforts. These young men who played today are the future of Flora Golf and the future is bright!”

Not only was there Golf a Plenty, there was Food a Plenty as the team stopped by The Beacon in Spartanburg to celebrate the victory as well as Blake Fisher and Cooper Darby’s birthdays!

Next up, Masters Week. The boys and the coaches will take a few days off to absorb the Greatest Sporting Event Ever before they head back to the links.

Golf is Cool a Plenty.