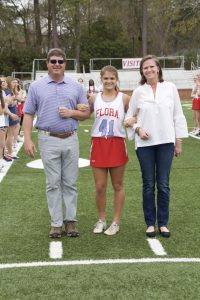 Francis is the daughter of Caroline and Bill LaMotte. She has been playing defense for 5 years and wears the jersey #41.

During Francis’s high school career, Francis was a member of the All State Defense Team, National Honor Society, and was a Junior Scholar.

One of Francis’s favorite lacrosse memories was scoring 3 goals against Blythewood during her senior season.

After high school, Francis will be studying Communications Science and Disorders at University of Georgia. 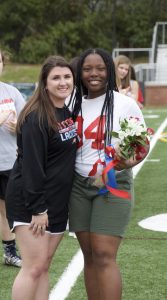 Danie’Quha Brannon is the daughter of Lakeisha Smith and Daniel Brannon. Danie’Quha has been playing goalie for the past four years and wears the #94.

During her high school year, Danie’Quha’s greatest accomplishments have been making it to her senior year, graduating from the Heyward Career and Tech Center’s Health Science Program, and making Principal Honor Roll during her first semester of her senior year. Also during high school, Danie’Quha has been a part of the JROTC where she won a National Award for leadership, won first place in unarmed exhibitions in the 2019-2020 drill competition, and second place in the entire competition.

Danie’Quha’s favorite lacrosse memory is playing with some of her closest friends and with some of the greatest coaches all four years.

After high school, Danie’Quha plans to go into the military and then study nursing.