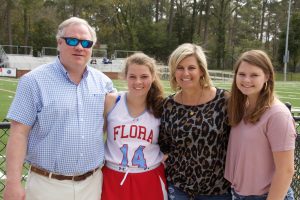 Hayley Andrews # 14
Hayley is the daughter of Kim and Jon Andrews. She has been a part of the A.C. Flora Girls Lacrosse Team for 5 years. She wears the jersey #14, plays defense, and is an academic all-star.

Hayley has been involved in many things during her high school career. For the past four years, she has served as class treasurer and is currently the President of the National Honor Society. Hayley is involved in youth activities at her church and in the community.

After graduation, Hayley will be attending Washington and Lee University. She plans to spend the next four years preparing for medical school. 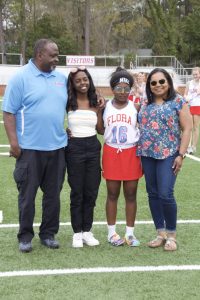 Kaitlyn Battle #16
Kaitlyn is the daughter of Felicia and Jacob Battle. She has been a part of the Falcon Lacrosse team for four years. She wears the jersey #16 and plays defense. Kaitlyn was named All Lower State Defensive Player and Academic All Star during her lacrosse career.

During her high school career, Kaitlyn was a student in the IB Program, a member of the National Honor Society, National Society of High School Scholars, Key Club, and Young Life.

Kaitlyn’s favorite lacrosse memory was when the team had team bonding at the Bowling Alley and going to Taco Time with her teammates.