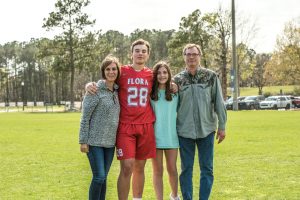 Will Cantrell #28
Will Cantrell is the son of Taylor and Fiona.
He has played lacrosse for 5 years, wears jersey #28 and plays the position of Defense.

Will’s accomplishments during high school include:
Being named a Palmetto Fellow. He is a member of the National Honor Society and an Eagle Scout with Troop 10.
Will’s favorite lacrosse memory: is beating Hilton Head on Super Saturday when he was in 10th grade.
After graduation, Will will be attending the University of South Carolina as a Capstone Scholar. 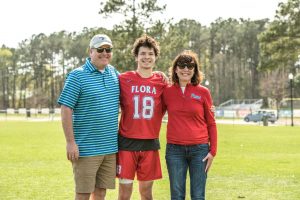 Mac Overbay is the son of Lewis and Vanessa.
He has played lacrosse for 5 years, wears jersey #18 and plays the positions of Midfield and Face-Off.

Mac’s accomplishments during high school include:
Captain of this year’s Lacrosse team, 2019 US Lacrosse Academic All-American, 2019 RCSD1 Mr. Sportsarama, 2019 1st Team All Upper State Midfield, 2019 2nd Team All State Midfield, 2018 Second Team All-Region Midfield, 2017 Coach’s Award and 2017 2nd Team Upper State Face-Off. Mac is a member of the National Honor Society, a Furman Scholar, a Wofford Scholar, a Palmetto Boys State delegate and is in the IB program.
Mac’s favorite lacrosse memory: making it to the State Championship game, his freshman year.
After graduation, Mac will be attending college at either Wofford, Washington & Lee or Clemson.