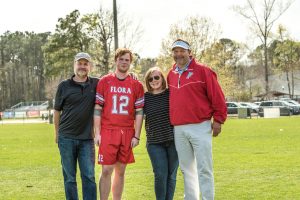 Connor Freeman is the son of Craig and Felicia.
He has played lacrosse for 5 years, wears jersey #12 and plays the position of Defense.

Connor’s accomplishments during high school include:
Being a member of the Flora Swim team, the National Honor Society and an Eagle Scout. He is active in Young Life and is a guitarist in the youth band at Eastminister Presbyterian Church.
Connor’s favorite lacrosse memory: is going to Grecian Gardens restaurant on his birthday before last year’s playoff game.
After graduation, Connor will be deciding between USC/Naval ROTC and the US Coast Guard Academy with hopes of becoming an aviator. 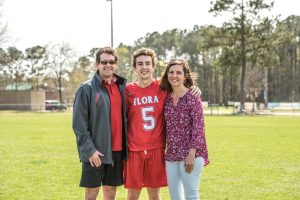 Lee Scarborough is the son of Matt and Jill.
He has played lacrosse for 5 years, wears jersey #5 and plays the position of Attack.

Lee’s accomplishments during high school include, spending his summers at Camp Gravatt as a camper and volunteer junior counselor. He has been hired to be on the staff at Gravatt this summer where he will continue to work to share the camp experience with youth of all ages. He is a member of the National Honor Society and the IB program.
Lee’s favorite lacrosse memory: as a freshman, Bryant threw a Gatorade bottle at Xavier after we won the Upper State Championship.
After graduation, Lee will be attending Wofford.